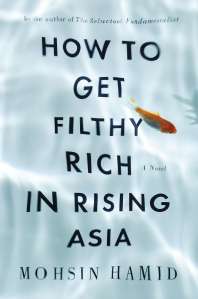 “And where money-making is concerned, nothing compresses the time frame needed to leap from my-shit-just-sits-there-until-it-rains poverty to which-of-my-toilets-shall-I-use affluence like an apprenticeship with who already has the angles all figured out.” – Excerpt from How to get Filthy Rich in Rising Asia by Mohsin Hamid.

The most striking thing about this book is its structure. Modeled as a self-help book, How to get Filthy Rich in Rising Asia is about the journey of a young man from abject poverty to being rich, well filthy rich, in the rising economy of an unnamed country of the Indian subcontinent. Divided into twelve chapters, each representing a phase of the life of the unnamed protagonist, and each based on an advice which the self-help book author is giving (avoid idealists, befriend a bureaucrat, don’t fall in love,etc.), the book is a very intelligent and well written satire on the contemporary urban life in the region.

This is probably the first novel I have read, where the entire story is told in a second person narrative mode (the self-help book author is talking to the unnamed protagonist, referring him as “you”). Further, none of the other characters have any names, they are just referred to as son, father, sister, pretty girl, wife etc. This unusual structure and writing style is the highlight of the book and makes it a must read for those interested in new and ingenious ways of constructing a narrative.

On the flip side, what this novel really lacked was a well-formed plot. The story moves really fast, often skipping decades between chapters. Not enough time is spent on developing the characters and I was never able to emotionally connect with the two main ones – the protagonist and the pretty girl. I neither felt the pains of their struggles, nor the joys of their success. This left me slightly disappointed.

PS: I received a complimentary copy of this book, in order to review it, from MySmartPrice Books. Know more about them here

One thought on “Book Review: How to Get Filthy Rich in Rising Asia”