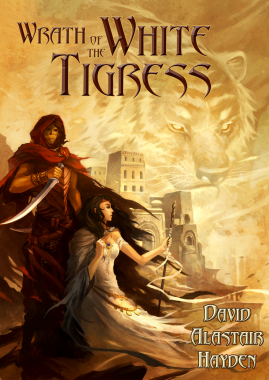 “He thought he was a hero. She showed him the truth. Now he’ll do anything to stop the man who made him a monster.” – Excerpt from Wrath of the White Tigress by David Alastair Hayden

When I started reading this book, I did not have much expectation. The publisher and the author were not known to me, nor had I any strong recommendations regarding the book. Further, it is not the genre which I generally prefer reading. However, a few pages into the book, it felt interesting. By the time I finished it, I was pleasantly surprised.

The story is a standard redemption/revenge drama based in a fictional fantasy world called Pawan Kor. The characters, specifically the protagonist Jaska Bavadi, are interesting and well itched out. Although the basic premise is predictable, story is well written and keeps one captivated. Certain sex scenes were un-necessarily pushed into the narrative. Probably it was an attempt to play to the gallery, but I would have been better without them.

The highlight of the book for me was the fine balance which David achieved between the pace of the primary narrative and the details/back stories of the secondary characters. This is where I have seen many authors failing, specifically for stories set in unfamiliar setting and having unfamiliar characters.

If you like reading supernatural/fantasy fiction, you should try this. It may not sweep you off your feet, but still you will enjoy it.

PS: I received a complimentary copy of this book in order to review it